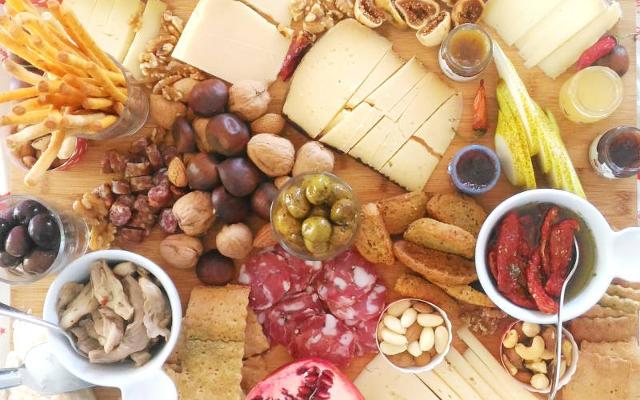 The soul of Sicily is best experienced through its exeptional

The distinct palette of the island

reflects its multi-layered culinary history and is

nothing less than transcendent.

The Sicilian method takes the staples of Italian cuisine;

as Caponata, Arancini, Pasta con sarde, and the superlative desserts as Cannoli, Cassata,

variety of complex flavors and imaginative combinations found nowhere else in the world.

the first cheese to be produced on the island, is still made using traditional techniques

Dressed meet, sausages and salami are often very spicy and flavored with garlic,

The best of the Sicilian art of pastry-making: cassata, cannoli and ice-creams.

Thanks to the soil type and warm climate with gentle breeze, Sicily produces excellent

Sicily is an island with many souls and many regions.

Since underwent foreign rule for many centuries,

the influence of the different cultures is still clearly visible in the Sicilian cuisine:

on one hand seafood (mainly tuna and swordfish),

on the other one, typical products from inland Sicily with unexpected tastes from

“haute cuisine” for the Sicilian elite,

thus introducing new recipes, which has put restaurants in Sicily at the forefront

At the bottom of  such experimental tradition is the rediscovery of old,

right onto the streets,

and where you can go in at any time of the day,

buy something and eat it while strolling along;

the polipari(men selling octopus) on the seashore in Palermo,

and all those shops selling scacciate in Catania,

scacce in both Ragusa and Syracuse,

not to mention all those kiosks in any square in Catania selling drinks and soda.

This website uses cookies to improve your experience while you navigate through the website. Out of these cookies, the cookies that are categorized as necessary are stored on your browser as they are essential for the working of basic functionalities of the website. We also use third-party cookies that help us analyze and understand how you use this website. These cookies will be stored in your browser only with your consent. You also have the option to opt-out of these cookies. But opting out of some of these cookies may have an effect on your browsing experience.
Necessary Sempre abilitato
Necessary cookies are absolutely essential for the website to function properly. This category only includes cookies that ensures basic functionalities and security features of the website. These cookies do not store any personal information.
Non-necessary
Any cookies that may not be particularly necessary for the website to function and is used specifically to collect user personal data via analytics, ads, other embedded contents are termed as non-necessary cookies. It is mandatory to procure user consent prior to running these cookies on your website.
ACCETTA E SALVA